At Crosby Energy Services, we don’t just emphasize employee safety: we recognize and reward it. The “Crosby Excellence in Safety” award celebrates those employees who best exemplify our core safety values and who have gone above and beyond in resolving potentially high-risk workplace hazards to protect themselves, their fellow employees, their job site, and the environment.Crosby Energy Services always adheres to the highest standards of conduct in all aspects of our business while maintaining vigilance toward the safety, health and well-being of all of our fellow employees and the protection of the environment for future generations. The following employees are a model of our commitment to safety.

Gary used his “SWA” and buddy system to help other workers lift heavy equipment over 50lb using proper lifting techniques. He also observed a third party exiting a vehicle on location with no hardhat. Once again, he used his “SWA” and advised other workers that everybody must wear proper PPE at all times. Thank you, Gary, for commitment to safety, good job!

Upon one of the field visits for a safety meeting, we noticed Freddy’s truck parked outside, first move forward ready, and his parking cone on the hood. We want to acknowledge Freddy for following proper practices, even when no one is watching.

When back loading a boat Jackson hooked up to a cargo box and attempted to pick it up, the door swung open. Jackson called all stop to the crane operator and put the box down, secured the door and continued the back load. ***Jackson was also recognized for submitting the most BBSM's for the quarter. Great Job Jackson!

While driving to a pad location, Chris noticed a plume of smoke coming from another pad location and decided he should check on it. When he arrived at the pad entrance, he noticed a gas cloud coming from the production packs. He immediately shut the truck off a safe distance from the release. He checked the wind direction, which was carrying the gas cloud away from the location, so he entered the location to hit the ESD to shut the well in and shut down all of the ignition sources. He then evacuated the pad and called the proper supervisors. Upon returning to the pad after the release had stopped, it was revealed that the dump body on the production packs had washed out. The quick-thinking by Chris prevented a potentially catastrophic situation from happening. Thank you, Chris for your safety-conscious quick thinking and all you do for Crosby Energy Services.

David Fowler was selected as one of the third quarter CES Award recipients. He received this award for his continued excellence in driving. Dave finished out the third quarter with a perfect score on his driver scorecard!

Robert won the CES safety award for alerting a truck driver to the dangers of using a cell phone while making an oil transfer. Robert explained why he was not allowed to ever be on the phone or any intrinsically unsafe device while working near combustible materials. Great Job Robert!

Reece Bazor is receiving this CES Safety Award for excellence in safety awareness. Reece identified and corrected a vent line that could have been a human hazard or environmental issue. Reece and his crew became aware of the problem and took corrective action to properly dispose of any vented materials from the pumps in question.

A Hand was fixing a chemical leak with cloth gloves so, Byron stopped him and told him to put on rubber gloves. Byron also explained to him chemicals could result in hazards and he should read and follow instructions on the SDS before dealing with any type of chemicals, here or anywhere.

Jackson Roberts is receiving this CES Safety Award for excellence in safety awareness. When offloading/backloading a boat, when they rigged up to a cargo box and snugged up the line, Jackson noticed the sling cables were tangled at the D-Ring, he told the crane operator to come down to unhook the box, corrected the slings and then hooked back up to backload the cargo box.

Congratulations, Aaron Bean! BSEE has recognized him with one of their coins for outstanding performance during an annual inspection. The inspectors were very impressed with his knowledge and hands-on experience. In addition, he has received the CES Safety Award for excellence in safety, along with a $50 gift card and CES Excellence shirt. Aaron works at Cox-SMI 236, Tiger Shoals

Travis Freeman is receiving this CES Safety Award for excellence in safety awareness. During crew change Travis found a scaffolding barricade blocking a stationary fire monitor and a 300lb wheel unit fire extinguisher. The barricade did not need to be there and should have been removed. Travis was presented with this certificate, shirt and $50.00 in the Crosby rewards store. Great Job Travis!

Levi received the award for a good driver scorecard. 2,651 Miles driven with 0 infractions

Kevin Morgan is receiving this CES Safety Award for excellence in safety awareness. While working for Shell, in Tioga, PA, Kevin Morgan noticed a restraint on a flow line was not attached properly prior to a pressure test. Kevin stopped and reattached the restraint properly. Kevin also communicated proper restraint installation with the crew, and the importance of walking down and checking your lines. 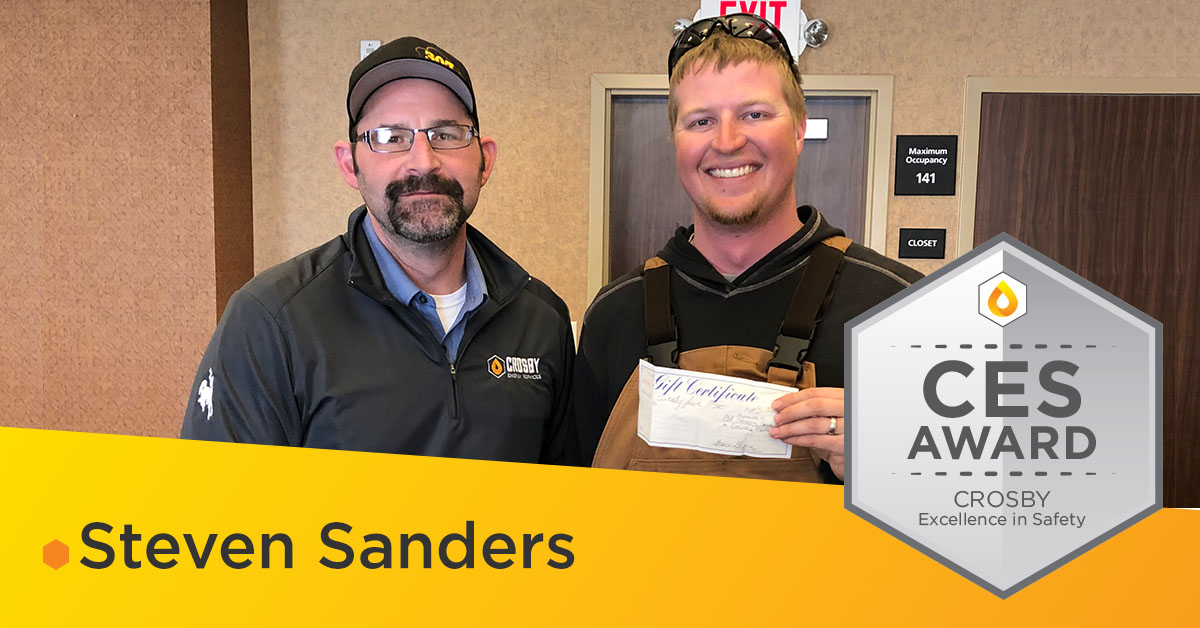 While Steven was out in the Pinedale Energy Partners field working on his wells he came across a hole being covered by a snow drift. He went on to uncover the hold then place caution tape all around the hole. That way no one would step into the hole and hurt themselves. We presented Steven with a $25.00 gift card to a local restaurant. Great Job Steven!

Rodrigo Villalobos-Chavez or Oscar as he likes to be called, drove a total of 1800 miles and scored 98.8%.